now available for most exams

YOUR X-RAY AT DIAGNOSTIC IMAGING CENTERS

A radiograph is the official name for the image of the body obtained using small amounts of ionizing radiation in the form of x-rays. Many will refer to the image as an x-ray. 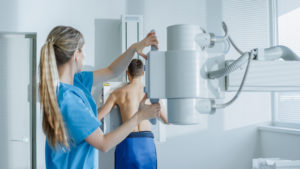 X-rays are the oldest and most frequently used form of medical imaging, with the famous first x-ray of the hand obtained by Wilhelm Roentgen in 1885. Those early images took 90 minutes to expose!

Imaging times today are a fraction of a minute making holding still much easier to handle. Today, our radiographs are obtained using digital technique rather than film, allowing digital manipulation and storage of the images, much like digital photography has replaced film.

Radiographs can be obtained on any body part,  but are most frequently used to evaluate the chest/lungs, the abdomen and the bones. More than one view of the body part being examined is routine for most studies.

Diagnostic Imaging Centers is also able to perform B reads for chest radiographs. This is a special reading of a standard chest radiograph performed by a physician certified by the National Institute of Occupational Safety and Health (NIOSH). The reading looks for findings in the chest that may indicate exposure and disease caused by agents such as asbestos, beryllium, or silica.

B Readers are certified through training and written exam to provide standardized interpretation determining if the patient has evidence of an occupational related lung disease. Diagnostic Imaging Centers is the only location in the Kansas City area with an on-site B Reader.

Appointments can be scheduled but are not required for routine x-ray exams, walk-in appointments welcome.

Tell us if you are, or suspect you might be pregnant.

You will need to remove jewelry or clothing that might interfere or project onto the image. No other preparation is needed.

A registered technologist will discuss the procedure with you and answer any questions you might have. Please inform the technologist if you are or could be pregnant.

You may be asked to change into a gown. You will be taken to the x-ray room where you will be positioned for the exam – either standing, sitting, or lying down on a table, depending on which part of your body is to be imaged. Holding still is important, and some tests will require you to hold your breath. Most often, at least two views of a body part will be obtained.

Results of urgent studies will be phoned immediately to your referring physician. Results on all radiographs typically faxed by the end of the day.

Latest from Our Blog

The COVID-19 Vaccine and Your Mammogram